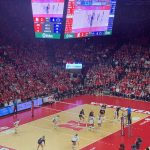 Coach John Cook said earlier this week that his team needs to eliminate “interference”, meaning off court distractions and events.

It began October 23 with a team shakeup when it was announced sophomore outside hitter Capri Davis would be taking an indefinite medical leave from the team. The team then committed a season high 31 errors in a five set loss at Purdue last weekend.

Then the team was shaken emotionally with news of the death of grad student manager Dane LeClair. Cook said the team was devastated and the situation was “a nightmare”.

“It was a tough week. I’m exhausted from everything that’s happened. I know emotionally they’re drained. I told them they can do amazing things if they really dig down, and they did,” said Cook.

And the team did do amazing things by placing their focus on the court, to the tune of starting November with back to back wins at home.

Back in action tonight against Penn State. #GBR 🌽 pic.twitter.com/57h84sf2bz

Nebraska came out on fire, hitting .406 while holding Penn State to just .091 en route to a 25-18 first set win. Sophomore Callie Schwarzenbach had four of the team’s five blocks in the set.

The pendulum swung in the second set with Nebraska hitting just .041 and committing 10 hitting errors. The Nittany Lions closed the set on a 5-1 run to even the match with a 25-18 win.

Things continued to stay tight in sets three and four where the teams would split by identical 25-21 scores. Through four sets Penn State was hitting just .189 with 20 attack errors, but had increased their hitting percentage in each successive set.

The emotions of the match and how contested each point was was on display with this third and fourth set rallies.

Nebraska raced out to an early 5-3 lead in the decisive fifth set. Junior Lauren Stivrins notched her 14th kill of the match to give the Huskers and 8-5 lead as the teams switched sides. The edge would get narrower as Penn State closed the gap to 10-9 with Nebraska still on top.

Sun’s 20th kill increased the lead to 13-10 Nebraska before Junior Jazz Sweet earned her 13th kill to make it match point at 14-11. Back-to-back points brought things closer but a kill by freshman Madi Kubik gave Nebraska the set and the match.

In one of the best @NCAAVolleyball matches of the year, @Huskervball is able to outlast No. 7 Penn State in five sets, sending the Lincoln crowd home happy. pic.twitter.com/hnwGLrG8dW

This was the fourth straight match between Nebraska and Penn State to go five sets, and the seventh in the last 10 to go the distance.

Nebraska remains undefeated on the season when holding opponents below .200 hitting and when leading in hitting percentage.

The Huskers will next host Northwestern on Wednesday, November 6.