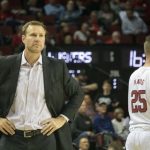 A fast start had things looking up for the new Hoiberg Huskers.

But it was all UC-Riverside from there with not much going for the home team.

“I thought early on we had a good burst out of the locker room,” said coach Fred Hoiberg. “I thought our transition was excellent, I thought defensively, we were doing a good job of disrupting them and turning them over. Obviously, that changed, and the momentum shifted.”

Nebraska would make just four more shots the rest of the half while the Highlanders would shoot 40-percent from beyond the arc to take a 32-28 lead into halftime.

The slow first half bled into the second, as UC-Riverside slowly pulled further away and Nebraska would not challenge in the final minutes as the Highlanders waltzed to a 66-47 victory.

“Once we got a slap in the face, we got stagnant a little bit,” said senior guard Haanif Cheatham. “We got a little bit stuck. I know we’re going to get better.”

“After last year, we had a huge summer [and] a huge fall where we really took a look at where we could get better and all we talked about was defense and rebounding,” said UC-Riverside coach David Patrick. “For that to show up in Game 1, to out-rebound a Big Ten opponent, to be +20 on the glass, it’s a huge deal for our team.”

Nebraska was led by sophomore Cam Mack who had 11 points, 9 rebounds, and 3 assists in the opener. Senior Matej Kavas was the only other Husker in double figures with 10 points.

The Huskers shot just 16-55 from the floor for the game, and only 23-percent from three.

This is the first season opening loss at home since 1980 when the Huskers fell to Wyoming, 62-59, in overtime. Nebraska was last held under the 50 point mark last season in a 60-45 loss against Maryland.

The least amount of points scored for an Iowa State team led by Hoiberg was 51. That came in a five point loss to Texas Tech in 2013.

“It’s a very disappointing loss,” said Hoiberg. “But you have to find a way in this business to get over it and put it behind you and get ready for the heck of the team we’re going to play on Saturday.”

Nebraska will next host Southern Utah Saturday at 1.