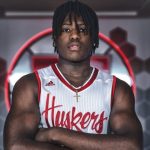 Yvan Ouedraogo, a 6-foot-9, 260 pound forward from France, announced on Sunday that he has committed to play basketball for Nebraska. The big man from Bordeaux was also considering TCU and Georgia Tech before settling on NU. He visited Lincoln back in April. As a member of the 2019 class, he’ll be immediately eligible to play in 2019. The signing was made official Monday morning.

“The first thing you notice about Yvan is his size and physicality, especially for just turning 17 in March,” NU head coach Fred Hoiberg said in a press release. “He gives us an immediate physical presence which was a priority for us. He has unbelievable upside and is someone we think can develop and flourish in our system.”

Last year, Ouedraogo averaged 12.7 points and 9.7 rebounds per game in the FIBA U-16 European Championships, helping lead France to a fourth place finish. The 17-year-old played club basketball at the Centre Fédéral de Basketball last year and currently attends the National Institute of Sports, Expertise, and Performance in Paris.

Ouedraogo is the latest addition to the Nebraska basketball roster, as NU head coach Fred Hoiberg continues his blistering pace in rebuilding the program. Since Hoiberg was officially hired in late March, he’s brought on five transfers and landed two commitments from a pair of walk-ons, Jace Piatkowski and Charlie Easley, out of Elkhorn South and Lincoln Pius X, respectively.

Now with Ouedraogo, the Huskers could field a starting five comprised entirely of international players. Shamiel Stevenson and Dalano Banton both are from Toronto, Ontario, Canada. Thorir Thorbjarnarson is from Reykjavik, Iceland and Matej Kavas is from Ljubljana, Slovenia.

I am proud and excited to announce I will be joining the @HuskerHoops program and coach Hoiberg this coming Fall. Looking forward to step foot on campus in Lincoln and get to work. #GBR 🌽 pic.twitter.com/Oizw9jGOcl