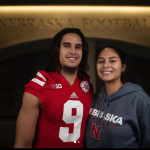 On his Instagram page on Saturday, Kanawai Noa announced his intent to transfer to Nebraska, to play out one final year of his college career. As a grad transfer, Noa will be immediately eligible to play in 2019.

This past season, Noa caught 30 passes for an average of 12.3 yards per catch. He had two touchdown catches and 369 total receiving yards. Noa had an injury in 2018 that cut his season short, but he did recover in time to play in the Cheez-It Bowl in December.

Noa has a few Husker connections. He would be familiar with Nebraska’s new defensive line coach, Tony Tuioti, who spent a few seasons coaching the Golden Bear’s defensive line. Also, NU AD Bill Moos’ son plays for Cal. Tuioti has been making the recruiting rounds in California as well.

Outside of JD Spielman, there aren’t many players at wide receiver who have solidified themselves. Noa will be able to push for a starting spot right away.