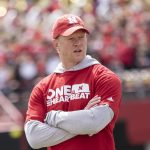 Year two was a defining moment in Scott Frost’s young coaching career at UCF. After inheriting a team that went winless in the 2015 season, Frost went 6-7 in the 2016 season with the Knights. The even bigger leap was made in 2017 though, when Frost led UCF to a 13-0 record and a win over Auburn in the Peach Bowl.

“We really didn’t know that success was going to come and didn’t feel it coming until fall camp that second year,” NU head coach Scott Frost told Jim Rome on his radio show Monday afternoon. “Some pieces fell right for us. Some things happened that we needed to have happened to have a complete team and everything took off from there.”

Frost also told Rome that he’s hoping that his second year as head coach of the Huskers will prove to be just as fruitful.

“We’re way down the road from where we were 12 months ago,” Frost said. “I would love to see the same type of leap forward in year two here.”

According to Frost, former Huskers Grant Wistrom, Ahman Green, Ndamukong Suh, Ameer Abdulluh, Mike Rozier and Irving Fryar have all contacted him to express their support.

“A lot of the guys have reached out to me… we’re just working every day to build a program that will make them proud.”

In other notes from the interview:

-Special teams and outside linebackers coach Jovan Dewitt met Frost in his office Monday morning. Frost says Dewitt is improving and is “just starting to get back involved again” with the team.

-Frost said he wants to develop walk-ons like they’re scholarship players and that a lot of them will be in the mix to start as they progress.