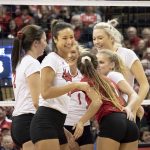 The Husker volleyball team wants to forget how last year ended, but they can’t. The picture of Stanford celebrating their national title hangs on the wall of Nebraska’s player’s lounge. In the background of the photograph, are the Stanford players, who are collapsed on the hardwood, celebrating in pure jubilation.

However, what’s striking about the photograph is the Husker players – huddled tight and resilient following the defeat. The message is clear – in fact, it’s watermarked in bold lettering that dominates the entire photo.

That motto will serve as the team’s mantra in 2019. It’s also what the Husker’s 17 day long trip touring Japan and China to take on professional teams from those countries will help drill into them – they’re in this thing together.

“We’re going to be there with no school, communication is tough, there’s no boys, there’s no distractions, it’s just us,” NU volleyball head coach John Cook told the group of reporters gathered at the Devaney Sports Center on Wednesday.

“Think about this, there’s going to be our little team in a country of one billion people,” Cook said.

Several schools take international trips to places all over the globe, but Cook says their Asia trip will serve a purpose that other places simply can’t.

“When you go to Italy, Spain, Slovenia, some of these countries that other teams are going to volleyball-wise, those tend to be more like vacations,” NU volleyball head coach John Cook said. “We tend to approach this as; we want these guys to go through something and experience something that will stress them and make them uncomfortable.”

In 2000 and 2006, Nebraska didn’t win a single match during their previous trips to Asia. Both of those Husker teams won a national championship. Nebraska has improved since then, winning a match in 2010 and winning two matches in 2014.

Sure, there will be sightseeing. They’ll see the Great Wall of China. They’ll tour the Forbidden City and Tiananmen Square. They’ll shop at Silk Street. But it won’t be luxurious.

“Asia is about as far out of their comfort zone they can get with food, accommodations… it’s just built for a different world,” Cook said.”

The trip will be significant in another way as well – it’s the year of the pig in China, which Cook says serves as the perfect metaphor for what he wants out of his squad in 2019.

“If they (the players) had bacon and eggs for breakfast this morning, the chicken who laid those eggs kind of made a commitment, but the pig made a total commitment,” Cook said. “We want our players to be like the pig. It’s the year of the pig so we’re all in.”

Because Nebraska is a young team that doesn’t have any seniors, the Huskers will largely have the same team for the next two years. A lack of senior leadership isn’t necessarily a detriment to Cook’s squad, though.

While there aren’t any seniors on the team, junior middle blocker Lauren Stivrins and sophomore setter Nicklin Hames will serve as the leaders, or “lieutenants” as Cook likes to call them. They haven’t been made captains yet but Cook said that they’ll have “17 days to prove themselves” during the trip.

The Asia trip will serve as the ceremonial start to the season, one that the Huskers are hoping won’t end in agony, like it did for them in 2018.

“As much as I’d love to forget that, I think that it’s totally driven this team,” Stivrins said. “We’re competing harder than we’ve ever had… no one wants to feel that again.”

The Huskers will leave on Saturday and return to Lincoln on July 2.