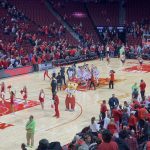 Nebraska Women’s Basketball(4-0) is undefeated through four games for the first time since the 2015-16 season.

It was ugly early, but a strong second half paved the way for a 64-49 win over Southern Illinois University-Edwardsville(1-3).

Both teams found success early, keeping the game tight at 10-9 with Nebraska on top. Then a trio of threes from senior Hannah Whitish(1) and sophomore Leigha Brown(2) forced SIUE to take a timeout with 2:25 to go in the first quarter.

The Huskers would not make another field goal until the 5:48 mark of the second quarter. That with a pair of free throws would be the only second quarter points for Nebraska as SIUE used runs of seven and four to only trail 23-22 at the half.

“They switched primarily to their 3-2 zone,” said coach Amy Williams. “We just got a little passive after missing some shots early in that (second) quarter. We needed to make some adjustments in the second half to get a little bit more movement and stay aggressive minded.”

Nebraska would be more aggressive as the third quarter would prove decisive, with the Huskers scoring 21 points on 50-percent shooting. A relatively even fourth quarter saw Nebraska outscore SIUE 19-17 to take the win and stay undefeated.

Former Husker Bria Stallworth notched nine points and two rebounds in the contest. Stallworth is a graduate transfer starting for the Cougars.

Nebraska is next in action hosting Southern(2-2) on Wednesday at 7 pm.