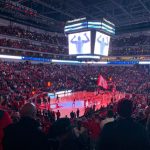 What started out as a flurry and looked like an impending shootout turned into a dominant performance by the road team.

“We got off to a good start,” said coach Fred Hoiberg. “Then when the ball stopped going in the hoop, I thought we chased down some rebounds; we got away from being solid on the defense end and allowed them to beat us, breaking us down, a lot those on gambles late in the clock.”

Not much changed in the second half as Rutgers continued to dominate inside with physicality, leading by as much as 22 before winning by a final score of 79-62.

This is the first win for Rutgers in Lincoln. The Huskers had won the previous four games between the two at Nebraska.

“They’re the most physical team we’ve played to this point,” said Hoiberg. “We talked a lot about that leading into this one and how important it was to try to keep them out of the paint as much as possible, and they got in there way too often. Too often, defensively, we allowed them to get into the paint where we either had to help with the big or they were spraying it out and driving us out on long closeouts. Once they shot it, whether they made it or not, we had no chance of getting it off the glass, just too big and too physical.”

The size and ability of Rutgers to get to the rim was an issue for Nebraska, as the Scarlet Knights scored 52 points in the paint to Nebraska’s 24. The 6’11 center Myles Johnson was 9-for-13 in the game with 18 points and 14 rebounds. The Scarlet Knights were led by Caleb McConnell who shot a perfect 8-for-8 from the field, including a pair of threes, to score a game high 20 points.

Nebraska was led in scoring by Haanif Cheatham with 16 points. Mack was the only other Husker in double figures with 11 points while adding six assists.

We’re going to come in tomorrow. [We’re] not going to dwell on it,” said Mack. “We’ve got a big game Tuesday. Come in, work and get straight to it.”