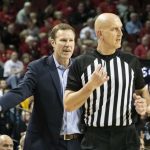 The inconsistency for the Huskers continued Saturday at Northwestern(6-9, 1-4 Big Ten)

Nebraska(7-9, 2-3 Big Ten) got up 7-2 early, but Northwestern would double up the Huskers the rest of the half to lead 42-27 at the break. A major part of that big run was the Wildcats seeming inability to miss from deep, going 8-for-14 in the first 20 minutes, while the Huskers shot just 30-percent from the floor.

Robbie Beran – Great name, great range. 🔥@NUMensBball has made six of its first nine threes on the afternoon: pic.twitter.com/bRbyui6jNi

The Huskers used a 12-5 run to start the second half and close the gap to eight, but the Wildcats quickly extended back to 14. The game stayed around the 10 point difference until a wild final four minutes.

At 3:14 and 2:30 Matej Kavas and Kevin Cross made back-to-back threes to cut the difference to just six.

Setting up for another fun finish on BTN. 👀

Kevin Cross splashes one to draw @HuskerHoops within six: pic.twitter.com/OkzSs2bDy2

Four missed free throws and a missed three-pointer later, Cam Mack banked home a triple to make the game 60-57 in favor of Northwestern. The Wildcats missed a three with 24 seconds left, setting the Huskers up with a chance to tie the game. Dachon Burke Jr. got a good look on the wing but there was just enough pressure that Burke tried to sell a foul that would not get called.

Northwestern made both free throws with nine seconds left to close out a 62-57 win.

The Huskers shot just 31.3-percent for the game, including 9-of-30 from downtown. The Wildcats cooled off in the second half, finishing shooting 39.7-percent and going 10-of-29 from three.

Mack led Nebraska with 11 points, 10 rebounds, and seven assists. This was his fifth double-double on the season.

Haanif Cheatham was the only other Husker to reach double-digits as he scored 10 points. Cross and Kavas each added nine points.

Burke scored seven points in the game, but his three at the 17:12 mark of the first half put him over 1,000 career points. Burke joins Kavas and Cheatham in surpassing that mark this season.