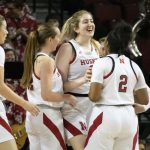 In the same week the Huskers fell at home for the first time in Big Ten play, they notch their first road conference win as well.

Nebraska(15-5, 5-4 Big Ten) needed yet another second half run to pull out the victory, but the first half was never more than a possession game that had the Huskers up 38-36 at the break. Wisconsin(10-10, 2-7 Big Ten) dominated the third quarter 21-7 to hold a 10 point lead going into the fourth quarter.

The Huskers began the final period on a 14-4 run to tie the game at 61 with 5:29 to go. The teams would exchange the lead six times until a three-pointer by Ashtyn Veerbeek gave Nebraska a 70-68 lead at the 1:03 mark. The Badgers turned the ball over twice in the final minute while Sam Haiby made a pair of free throws. A last second triple by Wisconsin brought the final margin to 72-71 in favor of Nebraska.

Nebraska shot just 33.9-percent from the field and made 6-of-18 three-pointers.