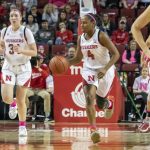 On the same day that Nebraskans honored those that have fought and are still fighting cancer, the Huskers used that same never give up attitude.

The No. 18 Hoosiers(19-6, 9-4 Big Ten) took control from the tip, scoring 12 straight while Nebraska(15-9, 5-8 Big Ten) went 0-for-7 and had three turnovers, including a pair of three-second violations. Kate Cain got the Huskers on the board with a long jumper at the 5:36 mark, but Indiana continued to dominate through the first quarter on 56-percent shooting to lead 26-6 after one.

“They came out and really played fast in transition and kinda punched us in the mouth,” said Nebraska coach Amy Williams. “We didn’t do a great job of handling their quick transition. They got some easy baskets and we didn’t respond.”

Indiana continued their run in the second quarter, going on a 10-5 run for the largest lead of the game at 36-11. From there, Nebraska began the long climb back.

“To have our bench come in and find ways to contribute was good to see,” said Williams.

Nebraska has had a pattern of poor third quarters, but that pattern was broken Sunday as the Huskers scored the first four points of the second-half and took a 7-1 to end the quarter down just 51-40.

With the Hoosiers going cold, Nebraska went on an 11-0 run to tie the game at 51 with 3:21 to go in the game. Indiana made two free throws and Nicea Eliely got a layup for the teams to remain tied with 56.2 seconds to go and Nebraska with the ball.

A well drawn up pick and roll ended in a turnover as the Hannah Whitish pass went off Cain’s hands and out of bounds. Out of the Hoosiers timeout, Grace Berger scored an uncontested reverse layup with 33.3 left in the game.

The ensuing Nebraska possession saw the ball largely remain on the perimeter, but as Eliely drove she was called for a charge. Indiana made both of their free throw attempts after Nebraska put them at the line.

Down four with 18 seconds remaining and no timeouts, the Huskers only mustered a forced triple that missed everything as Indiana survived the rally to win 57-53.

“We put ourselves in a position to win the ballgame and we should have got over the hump at the end,” said Williams.

The Hoosiers shot just 30.4-percent for the game and only made one field goal over the final 14:08 of game time. The final quarter saw Indiana shoot 1-for-16 from the floor but make all four free throw attempts.

“It was some of the best defense that we’ve seen here recently out of our team collectively for three quarters,” said Williams. “It just came a little too late after that first quarter barrage.”

Nebraska shot 36.1-percent from the field, including 5-of-18 from beyond the arc. The Huskers also committed 16 turnovers, including two in the final 40 seconds.

Cain was the only Husker in double figures with 12 points while also blocking five shots.

Nebraska has now lost four in a row and seven of the last nine. The Huskers will try to get back on the winning side hosting Penn State(7-17, 1-12 Big Ten) February 13.