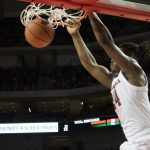 Nebrasketball has played well as a shorthanded team on the road in the Big Ten.

The Huskers (7-20, 2-14 Big Ten) were a shot away from upsetting a top-10 Maryland team, and they took Rutgers to the wire at the RAC before falling on a last second shot.

That trend continued Monday at Illinois (18-9, 10-6 Big Ten) for the majority of the game.

Fred Hoiberg announced before the game that Cam Mack had stayed home with the flu. Despite the lack of scoring over the past few games, Mack has provided the passing and offensive creativeness to drive this team.

With Mack out, Dachon Burke Jr., Jervay Green, Thorir Thorjarnarson, Haanif Cheatham, and Yvan Ouedraogo got the start. The bench consisted of Kevin Cross, Charlie Easley, and Akol Arop. Just an eight man lineup facing a team that will likely be a single-digit seed in the NCAA Tournament.

The Illini jumped out early, grabbing a 9-2 lead as Nebraska struggled to put the ball in the basket. By the 9:04 mark, Illinois had extended to a 22-11 lead, but Nebraska wasn’t going away.

Trailing by 10 with 5:13 to go in the half, Burke scored five points in 32 seconds followed by Cheatham scoring four in just over a minute to bring the deficit to just one point. A minute later, Burke got a layup to tie the game at 31.

As has been the case for a number of games this season, Illinois hit a triple in the final minute to go up three. Nebraska had a chance to tie the game going into the break, but a Thorbjarnarson missed a runner that ended up in the hands of Trent Frazier who threw the ball the length of the floor.

A Cheatham jumper started the second-half and Nebraska clawed back into the game. The Huskers outscored the Illini 15-9 in the first five minutes to tie the game at 46.

But that would be all the gas in the tank for Big Red.

Illinois tore off on an 11-1 run before a 6-0 run a couple minutes later to extend the lead to 67-53 at the 4:35 mark. This marked the 12th consecutive game that Nebraska had trailed by at least 14 points. The Huskers have dropped all 12 games.

The Huskers cut the deficit to 10 on a Cheatham triple and a Ouedraogo free throw, but were then held scoreless over the final 1:49 as Illinois grabbed the 71-59 win.

The Illini shot 39.4-percent for the game, including 5-of-19 three-pointers. They also grabbed 19 offensive rebounds that turned into 14 second chance points.

Nebraska shot 42.1-percent from the field and made 5-of-15 from beyond the arc.

The Huskers managed just eight assists on the game without point guard Mack, who was on top of the conference leaderboard going into Monday with 7.1 assists per game in Big Ten play.