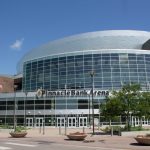 Nebrasketball will possibly be playing an old Big 12 opponent over the next few years.

Jon Rothstein of CBS Sports first reported on Twitter Wednesday morning that Nebraska and Kansas State have agreed to a multi-year series that would first be played at the Sprint Center in Kansas City.

Sources: Kansas State and Nebraska have agreed to a multi-year series starting next season at the Sprint Center in Kansas City.

The neutral site game would be played next season, where Nebraska only has the Myrtle Beach Invitational on the schedule according to Huskers.com. The next two seasons would have the series played in Lincoln(2021-22) and then to Manhattan(2022-23).

The Wildcats lead the all-time series 127-93 and have won the previous five meetings, including the last matchup 61-57 in 2011 at the Devaney Center.

Kansas State finished this past season at 11-21 (3-15 Big 12) while Nebraska went 7-25 (2-18 Big Ten). Both teams will look different next season with graduations and transfers.