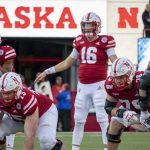 A packed quarterback room just got a little less so Tuesday for Nebraska football.

Bishop Neumann product Noah Vedral who followed coach Scott Frost from Central Florida to Lincoln has entered the transfer portal. In his only season at Nebraska, Vedral served as the No. 2 quarterback, battling through injuries to appear in six games, starting twice. He threw for 418 yards while adding 106 yards on the ground.

Vedral will graduate, giving him immediate eligibility at his next destination with two years remaining. His final appearance in a Nebraska uniform was as a basketball player at the Big Ten Conference Tournament.

Sophomore Adrian Martinez has been at the top of the depth chart the last two years, making it more difficult to crack the starting lineup for Vedral. Freshman Luke McCaffrey played in just four games this past season, preserving his season as a redshirt, while Frost added another scholarship quarterback with incoming freshman Logan Smothers.

With Martinez, McCaffrey, and Smothers as the three scholarship quarterbacks for 2020, the returning walk-ons include Matt Masker and Brayden Miller.