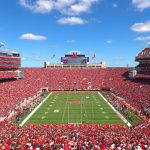 Governor Pete Ricketts laid out the changes coming for the next two Directed Health Measures Monday, the second of which could mean a full Memorial Stadium for Husker football.

The first announced DHM, Phase III, is set to go into effect June 22. While a number of businesses will see occupancy changes to allow more patrons, sports are seeing major changes to their designation and what will be allowed.

For grandparents and friends hoping to watch baseball and softball this summer, the move to the gatherings designation also means they can go watch. Under the current DHM running through Sunday, only household members can attend the competitions. This change will also allow fans to sit in the stadium bleachers.

The Nebraska Shrine Bowl, the annual high school senior all-star football game in Kearney, had previously announced a 10 guest per player policy for their event next month. Phase III would allow for more attendees, if they should decide to reevaluate that policy.

When Phase IV begins, which Ricketts says they are hoping to begin in July, the occupancy limits jump again. Indoor gatherings will move to 75-percent of rated occupancy while outdoor gatherings will go to 100-percent, with no maximum capacity. This means that if Phase IV is still in effect in September, home Nebraska volleyball games, where the Devaney Center has a capacity of 7,907, could hold 5,930 fans, and Husker games at Memorial Stadium could be full.

In both Phase III and IV, any events that will have more than 500 in attendance must be approved by the local health department. If Phase IV is in effect while the fall season begins, the Nebraska Athletic Department will need to submit plans and get approval from the Lincoln-Lancaster Health Department before moving forward. That department had previously rejected the plan to host the National High School Rodeo Finals while Lancaster County was still under Phase I.