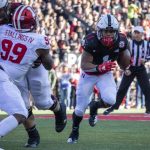 One of the most exciting players for the Huskers in 2019, Wan’Dale Robinson has been named to the Paul Hornung Award watch list.

Robinson is the only returnee of the four finalists for the Hornung Award in 2019. The wideout caught 40 passes for 443 yards and two touchdowns, adding 340 yards and three touchdowns on the ground in 2019.

As a true freshman, Robinson set school records for catches and yards by a freshman and was top three on the team in rushing and receiving yards and touchdowns. His efforts during the season earned him Big Ten Freshman of the Week honors twice.

The Hornung Award is given annually to the most versatile player in major college football by the Louisville Sports Commission.

Below is a list of National College Football Awards Association 2020 preseason watch lists being unveiled this month.