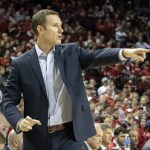 Five-star Bryce McGowens, the younger brother of current Husker Trey, picked Nebraska over Georgia and signed his Letter of Intent shortly after. The 6-foot-6 guard from Pendleton, South Carolina is a consensus top-35 national recruit.

“I believe that signing Bryce changes the whole trajectory of our program.” Nebraska Coach Fred Hoiberg said. “He is the centerpiece of what I believe is the strongest class that Nebraska basketball has ever signed.”

Earlier this week, the Huskers signed junior college sharpshooter Keisei Tominaga and four-star big man Wilhelm Breidenbach. The addition of the younger McGowens is something Hoiberg says goes a long way toward a consistent winner in Lincoln.

“Since I’ve been here, we have talked about building a program that can have sustained success, and adding a player of Bryce’s caliber shows that we building something special here,” Hoiberg said. “It shows that Nebraska can compete for some of the top players in the country. It also says a lot about the type of person that Bryce is. He wanted to go to a place where he can create a legacy and help Nebraska basketball reach new heights.”

“As a player, Bryce is an elite scorer, a perimeter player who is efficient from all three levels,” Hoiberg said. “He uses his size well to create mismatches and possesses the athletic ability to play a number of spots in our system. His skill set meshes with the up-tempo style we play, and he has the ability and potential to flourish in the system.

“Bryce comes from a great family, and we are pleased to add him to our roster next year. The only person in our program who may be more excited than me today is his older brother Trey, as they will have an opportunity to play together at this level.”

The season is set to begin November 25 with the 2020 Golden Window Classic, though a schedule for that event and the rest of the season has yet to be released.