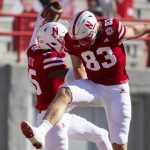 For everything being so different in 2020, there were plenty of familiar sights at the home opener for the Huskers Saturday.

The tunnel walk. Red balloons on the first score. And a nervous second half as the Huskers nearly gave the game away.

Nebraska (1-2) hasn’t had one of those since a 54-7 win at Maryland 357 days ago. That fact wasn’t lost on Nebraska coach Scott Frost.

“The state needed it. The team needed it,” Frost said. “I needed it.”

Winless on the season and looking for a spark, Frost turned to redshirt freshman Luke McCaffrey to start at quarterback.

“That decision was one of the hardest since I’ve ever made,” Frost said. “I think so much of who Adrian Martinez is as a football player and as a person. He’s been through a lot with us. He certainly practiced well enough to play so it was a tough decision.

“We went with Luke, I thought it considering his first start he did a lot of really good things and there’s a lot there to build on, but we had two unbelievable individuals at that position and I was happy for Luke today.”

McCaffrey led the Husker offense on an 11 play, 75 yard touchdown drive to start the game, capped off by a quarterback sneak into the end zone. The first-time starter finished the game with a team-high 78 rushing yards. He also went 13-for-21 through the air with one interception and one touchdown.

“It’s an honor to be on the field with these guys and this team,” McCaffrey said.

That one touchdown was on a sweep Kansas City Chiefs style that true Freshman Zavier Betts took the house from 45 yards out. Betts finished with two catches for a team-high 54 yards.

Betts’s ceiling is “through the roof,” according to sophomore wideout Wan’Dale Robinson.

“You’re like this kid can be special, and I tell him that all the time,” Robinson said. “I’m like, ‘dude you can really be special you just gotta keep working and come to work every day and just do the right things and everything’s gonna fall right into place.'”

Besides two field goals from Connor Culp (22, 25), the only other score for Nebraska in the first half was a 26 yard strip sack by Deontai Williams that turned into a scoop and score in the second quarter.

Penn State managed just a pair of field goals in the first two quarters as Nebraska led 27-6 at the half.

But the second half, as has been the case for awhile now, was anything but easy for Big Red.

Penn State missed a 56 yard field goal, but scored on the next three possessions on rushing touchdowns of 31 and five yards out while adding a 27 yard field goal. Nebraska managed a 30 yard Culp field goal to lead 30-23 with 9:20 left in the game.

“Maybe I got a little too conservative this time,” Frost said. “We threw two interceptions in the red zone a week ago and I kind of challenged the guys to commit to running the ball in when we got it down there. Thought we did a good job design in one pass play and had a guy open in the back of the end zone in the first half and just didn’t catch it.

“But then we got ahead to be honest with you in the last thing I wanted to do is give up points and do anything to take chance with the ball. So our game plan kind of shifted like I said from really being aggressive and taking shots to trying to manage the game and make sure we didn’t give one away.”

Frost did open the playbook with the single possession lead, but McCaffrey got his as he threw and outside linebacker Brandon Smith intercepted the ball at midfield.

The 14 play drive for Penn State stalled in the Nebraska red zone as Will Levis, the backup quarterback who got most of the run for the Nittany Lions after Sean Clifford was pulled in the first half, threw four consecutive incomplete passes.

Nebraska fans will recognize that questionable play calling so close to the end zone. Penn State ran the ball five times for 21 yards on the drive, but went just 2-for-9 through the air.

Nebraska went three-and-out to give Penn State the ball back with 2:34 left starting at their own 31 yard line.

Again, the visitors marched down the field to a first-and-goal at the Nebraska 9, but that’s where the Blackshirts made their last stand. On first down, Will Honas forced a QB hurry. Second down produced an incomplete pass with nobody open. Luke Reimer sacked Levis back to the 13 on third down, forcing the final Penn State timeout.

Then on fourth down, Ben Stille bullied his way into the backfield to nearly get the sack and force Levis to make a desperation throw to nobody, giving Nebraska the victory.

“I didn’t really know (if I got the sack),” Stille said. “Either way the game was over. Doesn’t really matter to me how it ended. As long as we got the stop, that’s what was important to me.

The bend but don’t break defense was on display Saturday as Penn State posted 501 yards of total offense and had the ball for nearly 13 minutes more than Nebraska over the course of the game. But of the six red zone chances, the Nittany Lions managed to score just four times, with two of them being field goals.

“There’s still a lot of things we need to clean up but I feel like the team needed to turn the page on being in some of those games and not finding a way to get it done,” Frost said. “I think everybody in Nebraska can see the progress the defense has made and how much more athletic we are how much harder they play how much smarter they play and credit to coach Chinander and the defensive staff.”

Marquel Dismuke led the Blackshirts with 15 total tackles, followed by Honas with 13 and JoJo Domann with 12. Cam Taylor-Britt, despite not showing up much in the stat sheet, had a first-half interception that set up a field goal. Taylor-Britt also exemplified the mindset of the secondary when dealing with a first and goal at the end of the game.

“I just know one thing: lock my side of the field up,” Taylor-Britt said. “Really just lock in. Block all the distractions out. I felt like it was on (the defensive backs) and we want it to be on us.”

Offensively, managed 298 yards of total offense. With Dedrick Mills exiting the game early “nicked up”, Marvin Scott III and Robinson handled the rest of the running back touches, five rushes for 11 yards and 16 rushes for 60 yards, respectively.

Six Huskers caught passes, with Robinson reeling in a team-high five but managing just 11 yards. Austin Allen continued to impress from the tight end position, catching three of his four targets for 39 yards.

Nebraska stays at home next Saturday, November 21 to host Illinois (1-3) who is also coming off their first win of the season. That game is set for another 11 a.m. kickoff.