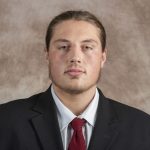 Another Nebraska football senior has made his decision.

Matt Farniok announced on Twitter late Monday that he was declining an extra season of eligibility to enter the 2021 NFL Draft. He called playing at Nebraska an “unbelievable experience” that he’ll remember for the rest of his life.

Thank you for everything #GBR pic.twitter.com/QGxoJF46yo

Farniok is one of 13 two-time captains in Nebraska history. He started four games as a freshman then every game his sophomore, junior, and senior seasons. In 2020, Farniok was named Honorable Mention All-Big Ten.