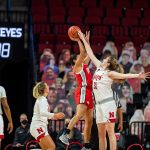 A look at what’s happened in Huskers athletics over the past week.

Nebraska men’s basketball paused all team activities last Monday due to COVID-19 positives among Tier 1 personnel. Sunday, the program announced that 12 individuals, including coach Fred Hoiberg and seven players, are in isolation or quarantine due to positive test results. The current pause has postponed games against Illinois (Jan. 13), Maryland (Jan. 16), Minnesota (Jan. 20), and Iowa (Jan. 24).

Pro Big Red men’s basketball: Isaiah Roby continues to perform well for the Thunder. Roby has made three starts this season, including Friday as he scored 14 points in a 127-125 win over the Bulls.

Nebraska women’s basketball earned another upset win, taking down No. 15 Ohio State 63-55. The first loss for the Buckeyes came as the Huskers were without their second leading scorer in Isabelle Bourne, who missed the game with an ankle injury.

Pro Big Red football: Three former Huskers are off to the NFC Championship after the Buccaneers downed the Saints Sunday. Lavonte David had seven tackles while Ndamukong Suh and Carlos Davis added three and one, respectively.

No. 6 Nebraska wrestling suffered their first loss of the season, falling 31-6 at No. 1 Iowa. Nebraska’s points came at 174 and 197 as Mikey Labriola and Eric Schultz both earned decisions.

Pro Big Red wrestling: Former Husker and Olympic champion Jordan Burroughs fell in a FloWrestling event to No. 1 David Taylor 4-4 on criteria. The two met in Lincoln as they prepare for the Tokyo Olympics.

No. 5 Nebraska volleyball continues to prepare for the long-awaited season. The Huskers will be without sophomore setter Nicole Drewnick who has opted out of the season.

Nebraska track and field hosted the Huskers Triangular with Iowa and Minnesota. Eight Huskers won events in the non-scored meet.

Nebraska swimming and diving lost their season opener 170-128 at Iowa.