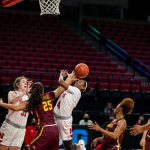 Over a solid stretch of the past five games, Nebraska (7-5, 5-4 Big Ten) stayed fresh by controlling tempo. Tuesday afternoon saw the game get sped up at times, leading to a shorthanded group getting gassed and going cold late in a 76-71 loss to Minnesota (3-7, 2-6 Big Ten) at Pinnacle Bank Arena.

The Huskers started out hot, shooting 53 percent in the first half for leads of 20-10 and 42-39 after the first and second quarters, respectively. The issues began in the second quarter when Minnesota began extending pressure and denying the ball to Sam Haiby who scored 10 points in the first quarter. Haiby then was called for her second foul, sending her to the bench to avoid further trouble.

That move took Nebraska’s offense out of its flow and put extra pressure on the rest of the lineup to handle the ball. Haiby on the bench also removed a perimeter defender. Minnesota made 15 3s on the game, including six in the second quarter alone.

A little gassed, but still in it. Kate Cain hit a jumper with 3:17 left in the third quarter to put the Huskers up by five. Then the lid was placed on the rim for a team that over 50 percent to that point.

Nebraska did not make a shot until Whitney Brown got a layup with 2:53 left in the game, a stretch that saw 16 straight shots miss the mark.

Gassed and now ice cold, but still not out. A Haiby jumper with 1:10 tied the game at 68. The ensuing possession saw another dagger, as Minnesota hit their final 3 of the game.

The Huskers missed on the other end and had to foul. Minnesota made enough free throws, and despite a Haiby 3 late, the visitors held on for the win.

Haiby earned her second consecutive double-double with team-highs of 25 points and 12 rebounds. Ashley Scoggin was the only other Husker in double figures with 16 points, including four 3s.

Nebraska has a few days off before looking to bounce back Monday at Illinois.