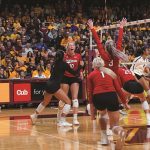 League coaches voted the Huskers third in the preseason poll, behind Wisconsin and Minnesota. The Badgers and Gophers both made the national semifinals last season, while Nebraska fell to Wisconsin in the regional finals. Wisconsin is the defending Big Ten champion and NCAA runner-up.

National coaches see those three schools in a different order. The preseason AVCA poll has Nebraska ranked fifth, with Minnesota at seven and Wisconsin occupying the top spot.