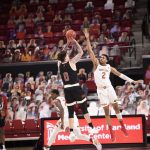 The Huskers led the Terrapins (12-10, 6-9 Big Ten) by as much as five points in the first half, but a half court 3 by Maryland gave the home team a four point lead at the break. Nebraska had to claw to tie the game at 44. From there it was a 15-3 run for Maryland over the next five minutes.

Nebraska never threatened down the stretch as Maryland took the win 64-50.

Several scoring droughts for the Huskers lasted more than two minutes at a time, meaning it was multiple offensive possessions between baskets. The win Sunday featured an eight minute scoring drought, and such instances have been the bane of numerous games this season.

Many of the missed offensive opportunities came in transition. The Huskers forced 17 turnovers, 13 of which were steals, but only managed four points off of those turnovers. In the previous two games combined, Nebraska managed a total of 20 points off of 25 turnovers.

Teddy Allen scored 18 points to lead the Huskers in scoring, while also pulling down a team-high five rebounds.

Dalano Banton was the only other Husker in double figures at 10 points.

A missing piece for most of the game was Derrick Walker. His emergence over the past several games has given Nebraska an inside presence with the ability to at least battle bigs on the defensive end. Walker played just eight minutes during the first half.

Nebraska coach Fred Hoiberg said after the game Walker “wasn’t feeling well” so the staff made the decision to be safe and sit him for the second half. Hoiberg had previously mentioned Walker as one that was having a tough time catching up on conditioning following the COVID pause of team activities.

The Huskers struggled shooting the ball, going 33 percent from the field and making just 8-of-28 3s.