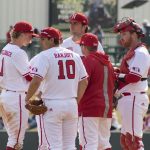 Teams will play a 44-game, league-only slate. There will be no Big Ten Tournament this season. Each team is scheduled to play every other conference team at least three times.

Nebraska opens the season with two weekends at neutral sites. The first is in Round Rock, Texas, beginning March 5. The Huskers will play a four game series at Dell Diamond Stadium. The next week, Nebraska will play two games each against Iowa and Ohio State at U.S. Bank Stadium in Minneapolis, Minnesota.

The home opener for Nebraska is a four-game series against Minnesota, beginning March 26. Other home series are against Maryland, Rutgers, Northwestern, and Michigan.

The Big Ten is including a series of pod weekends, where teams will play two road games against a host school and two neutral site games against another conference foe. The Huskers are set for two pods, with the first at Rutgers along with Indiana and the second at Indiana along with Ohio State.

The full schedule is below.