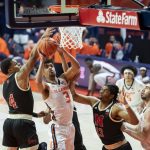 No luck in the rematch for the Huskers.

Illinois was without National Player of the Year candidate Ayo Dosunmu, who suffered a broken nose earlier in the week. Dosunmu led the Illini comeback in Lincoln a couple weeks ago as he scored 31 points.

But even without one of the best players in the country, Illinois had the better energy from the start.

“Our edge or the juice that you have to play with against a team like this coming off a loss (wasn’t there),” Nebraska coach Fred Hoiberg said. “We knew they were gonna come out foaming at the mouth and we just didn’t match their energy.”

The ugly first half included five technical fouls, with two going to Husker players. Suspect officiating and game control was not the reason for the loss though, as Hoiberg continued to point to the turnovers and lack of taking care of the ball.

“I thought we played much more selfish than we had been,” Hoiberg said. “We just continue to have careless, mindless turnovers, driving into the pile. The problem is I take a guy out for it and I put the next guy in and he does the same damn thing.”

On the scoring side of things, Nebraska shot 44.3 percent for the game, including 5-of-21 on 3s. Trey McGowens led the Huskers with 18 points, while Shamiel Stevenson and Kobe Webster each contributed 12.

The Huskers are back at home Saturday to host Minnesota.