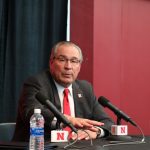 A lengthy list of names for the open Pac-12 commissioner post includes that of Nebraska Athletic Director Bill Moos.

The Mercury News in San Jose reports Moos among a number of names “to get reaction from the presidents.”

Moos played football at Washington State, where in 1972 he earned first-team All-Pac-8 honors. He worked in the conference as an athletic administrator for his alma mater as far back as 1982.

While the report says the number of names is length, four are listed as those receiving initial consideration: